HOW TO KNOW WHICH GEM IS RIGHT FOR YOU ? by AstroRrachita

There are 84 categories of gem stones which are popular as per Astrological belief.
The more clearer the stone, it will not give negative effects.
Except Rahu and Ketu gems i.e. Gomedh (Hessonite) and lahsuniya(cat's eye) no other gem can give negative effect. Only its positivity may be reduced or it may be ineffective.
There are 4 groups of planets possible in a horoscope(as per lordship of houses):
Group A : KENDRA -  1,4,7,10
Group B: TRIKONA - 1,5,9
Group C : TRISHDHAY - 3,6,11.....AND 8
Group D : NEUTRAL - 2,12

Group C is the most dangerous group for gem wearing. If any planet signifies 3,6,11,8 the gem related to it must NOT be worn.

In conclusion when to wear GEM ? 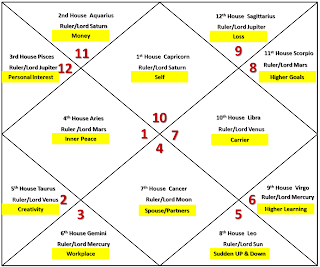 For ILLUSTRATION in this kundali with Capricorn ascendant the gem for Mercury EMERALD can be worn as mercury is holding lordship of houses 6 (Trishdhay) and 9(Trikona).
Its a PAAPI PLANET in this case .
Now since 9 is most powerful of all Trikona houses ( 9>5>1)  this gem can be safely worn by the individual. Now in this horoscope with Aquarius ascendant while lagan lord is same Saturn we will not suggest to wear EMERALD because Mercury is lord of 8(malefic house and in group of Trishdhay like ) and also a Trikon house . But here 5th TRIKON is less powerful than 9th so it will not be positive for the native. 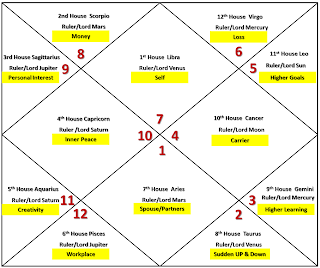 In this horoscope Mercury is lord of 9th trikona house which is very positive but the other lordship is falling in 12th house which is a neutral house. In such case check the OCCUPYING PLACE of mercury and check its acoompanying planet. That will decide whether Mercury is positive or negative finally in this horoscope. Suppose its posited with Jupiter which is a functional malefic in this chart then Emerald cannot be suggested.

Apart from accompanying planets(SAHCHARYA) you should also check for which planets are aspecting Mercury (and their lorships) and also in which planet's star or nakshatra Mercury is posited in. This will tell finally whether Mercury stone is suited for the native or not.

NOTE: while considering the gem stone also take care that the bitter enemy of 8th house lord needs to be calculated (for that particular chart) and its stone should not be worn as it reduces the LONGEVITY of the native.
Posted by Astro Rrachita at 8:43 PM